In dealing with the aftermath of floods, clean water is important to keep people healthy and prevent ongoing diseases that keep children out of school and people working to support their families.

After 4 months of project implementation, 25,177 people were supported to have a secured access to water for daily usage. 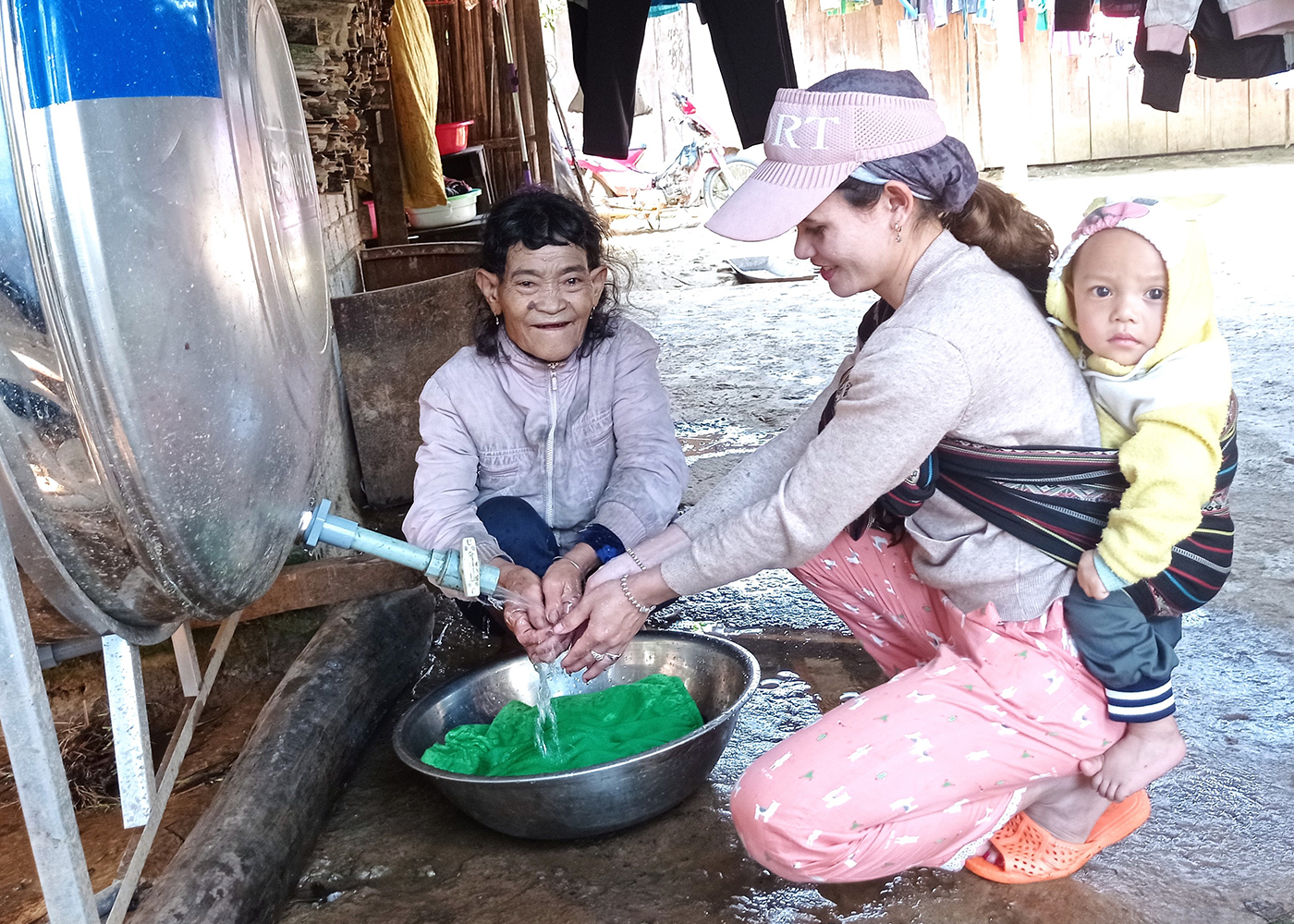 “The tank makes our lives so much easier. Now we don’t have to worry about lacking water for cooking, washing, and showering. […] This year we can receive guests, not fearing we would out of water,” shared the 70-year-old Bền.

Before receiving the water tank from World Vision, Bền and her daughter-in-law would take the only two 5-liter plastic cans they had to fetch water from a stream 30-minute-walk away from home. While her bread-winning son looked for daily waged jobs, her husband would join in the laborious water-fetching task too when he had a free day, but the water they could fetch each day was hardly enough for their family of six to eat and drink, let alone their cleaning needs.

The supported water tank was first used to store rainwater. Then came dry season, using her son’s wage from acacia cutting, her family and other neighboring ones pooled money to buy a pipe that could channel water from the upper stream straight to the tank. Next to the tank, Bền’s son built a small bathroom, so the family’s female members can practice personal hygiene conveniently.

“Now that we don’t have to fetch water every day, my daughter-in-law and I can also work to make an extra income for the family,” Bền said. Ngô Thị Xàng is a 97-year-old woman who is currently living in Láng Xá Bầu village, Thủy Thanh commune, Thừa Thiên Huế province. Her husband died early. She has a son, but died in the war, so over the past 50 years she has only lived with her daughter-in-law. No professional skill, their life based on their ability to work as a hired labor. But now, these women are too old to work so they have to live on a monthly social allowance.

Xàng said, "There is clean water in this village. The water pipeline goes back to each house. But in the flood season, the water plant will cut off the water and, in the summer, it is very weak, sometimes the water is lost all day. Previously, I accumulate water in a 20-liter plastic can. That water just enough to cook, not enough for bathing, let alone watering vegetables. Last January, I received a 1000-liter water tank from ADRA Vietnam. The ADRA's staff told me that it was a gift from the Australian Government and they explained using inox tanks is safer for health than plastic buckets. I am extremely grateful and happy". 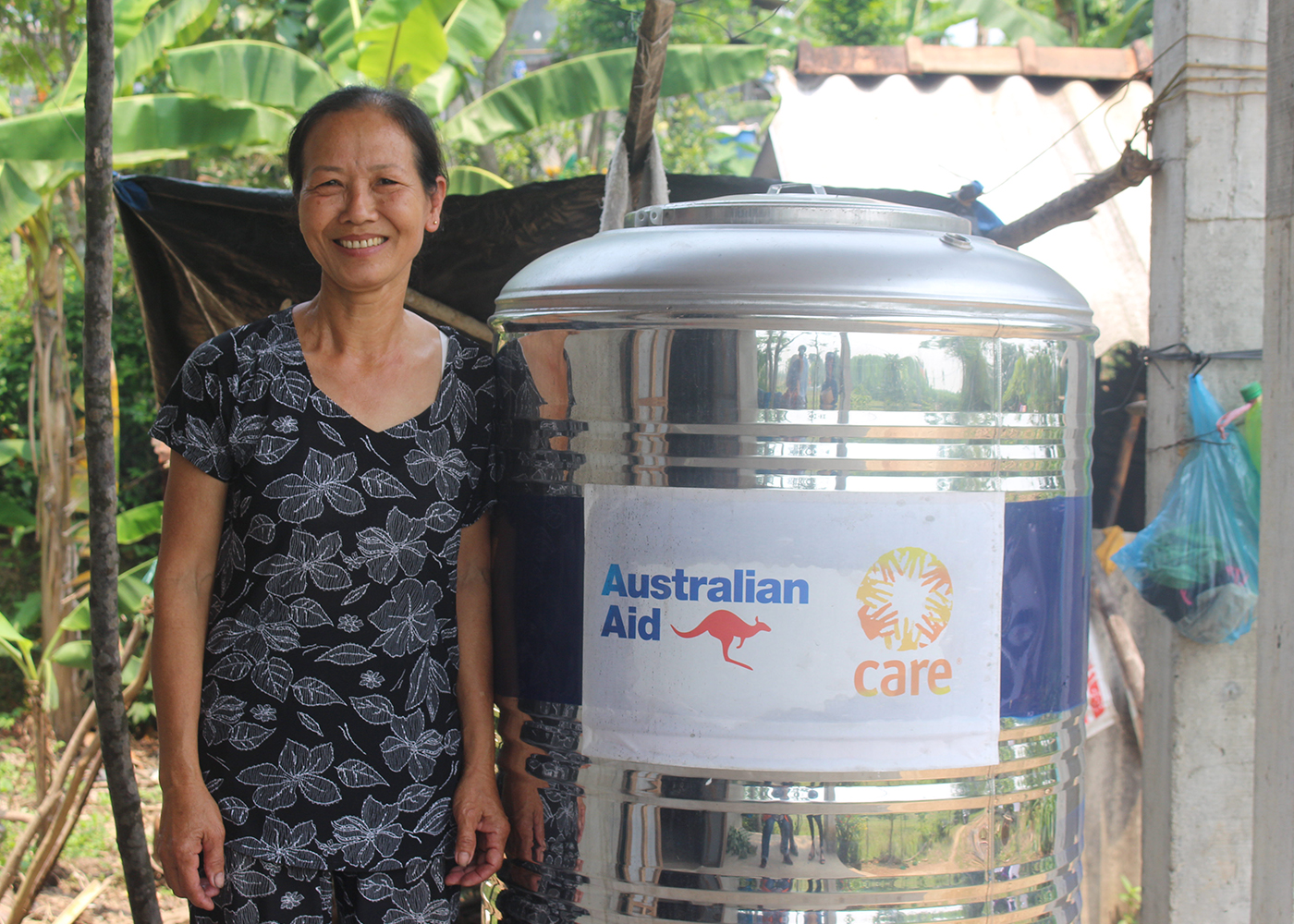 “Thanks to this tank, my shoulder pain was relieved a lot”, Nguyễn Thị Huệ happily shared about the new water tank. Previously, she needed to carry water from the well for direct usage, and does it at least twice or three times per day. With a middle-aged woman like Huệ, the weight of each water bucket really wore her out.

“It helped a lot, since we had nothing to store the water. In the past, whenever we want to use, we need to carry water from that well. Now we don’t need to do that. Simply just pump water from well straight up to the tank”. With each pump, Huệ and her daughter could use water for at least 5 days straight.

As she can save a lot of time from fetching water, Hue started raising chickens and cultivating cassava again. Her daughter also found a new job near their house.

It might take more time for life to get back to normal, but for Hue and many people affected by the flood, tomorrow will be surely brighter than yesterday.