“Life is good now. Everything is better”

“Phương Thảo? Is that Mỷ’s daughter you are asking about? Of course I know that kid. She won two medals in the province’s aerobic competition”, exclaimed Thảo’s neighbor. Thảo is the pride of X. commune not only for her medals but also for her exemplary character.

X. commune was one of the poorest communes in Điện Biên Đông district, Điện Biên province. Located 40 kilometers away from the district’s center, the long distance made the already-craggy road connecting the commune and life necessities even more challenging. With 85% of its population being of Mông descent, most families in X. commune relied on traditional farming like slash-and-burn and growing mountain maize on hillsides, making their incomes vulnerable to the ever-changing and unpredictable nature of weather.

And Thảo’s family was no different. Her parents, grandmother, older brother Quốc and Thảo shared a small wooden cottage with no running water nor a built-in toilet. Every day, an adult in the house would have to go fetch water far away before going to work while Thảo and her brother, still babbling toddlers, would stay still in their mother’s pouch and “accompany” her to the village’s school.

“Back then, I often took the kids with me whenever I had a school meeting or lecture. I would carry them the whole trip, from the house and over the mountain to the school. We would leave before it got dark because the route was dangerous. Whenever it rained, the whole village ‘froze’ as we could not go anywhere. There was no concrete road, so mud was everywhere. Children could not go to class, and adults wouldn’t want to go out to work” Thảo’s mother, Ms. Mỷ, looked back.

Then, World Vision Việt Nam came to X. commune. Families like Thảo’s received a wide range of support, materials to build sanitary toilets to clean water training sessions. The Organization also helped repair and build concrete roads within the village. The rainy season would no longer be a “stand-still season” anymore.

Thảo and her brother also became registered children in World Vision Việt Nam’s Child Sponsorship program.  As World Vision Việt Nam aims to improve living and learning conditions for registered children holistically, the family also received different livelihood assistance over the years. Thanks to the program’s help with barn setting, ducklings, animal feed, and husbandry training, Thảo’s family started raising livestock more efficiently as an additional, stable income source. The family meals were getting heartier with eggs and chicken from their own backyard.

Better nutrition and living conditions also had a direct result on Thảo and her brother. The two siblings broke out of their shells and actively participated in the Sponsorship Program’s Children Club. the club meetings, they learned about important life skills, protection against violence and harm to self-actualization to realize one’s dreams. Thảo enjoyed most of the information nights and training sessions, but her favorite was the performing shows. With her smiling eyes, sweet voice, and sprightly energy, Thảo seemed a different person every time she got on stage – confident, lively, and yet composed. Hence, the club leaders would often give her the important role of hosting the entire show or performing a gig.

At home, Thảo and Quốc helped out as much as they could. After finishing all the chores, Thảo loved sitting and talking with her grandmother, even though she could not speak Kinh well. Listening to Thảo’s stories about school, her grandmother’s face beamed with a gentle smile as she cared deeply about Thảo’s studies. 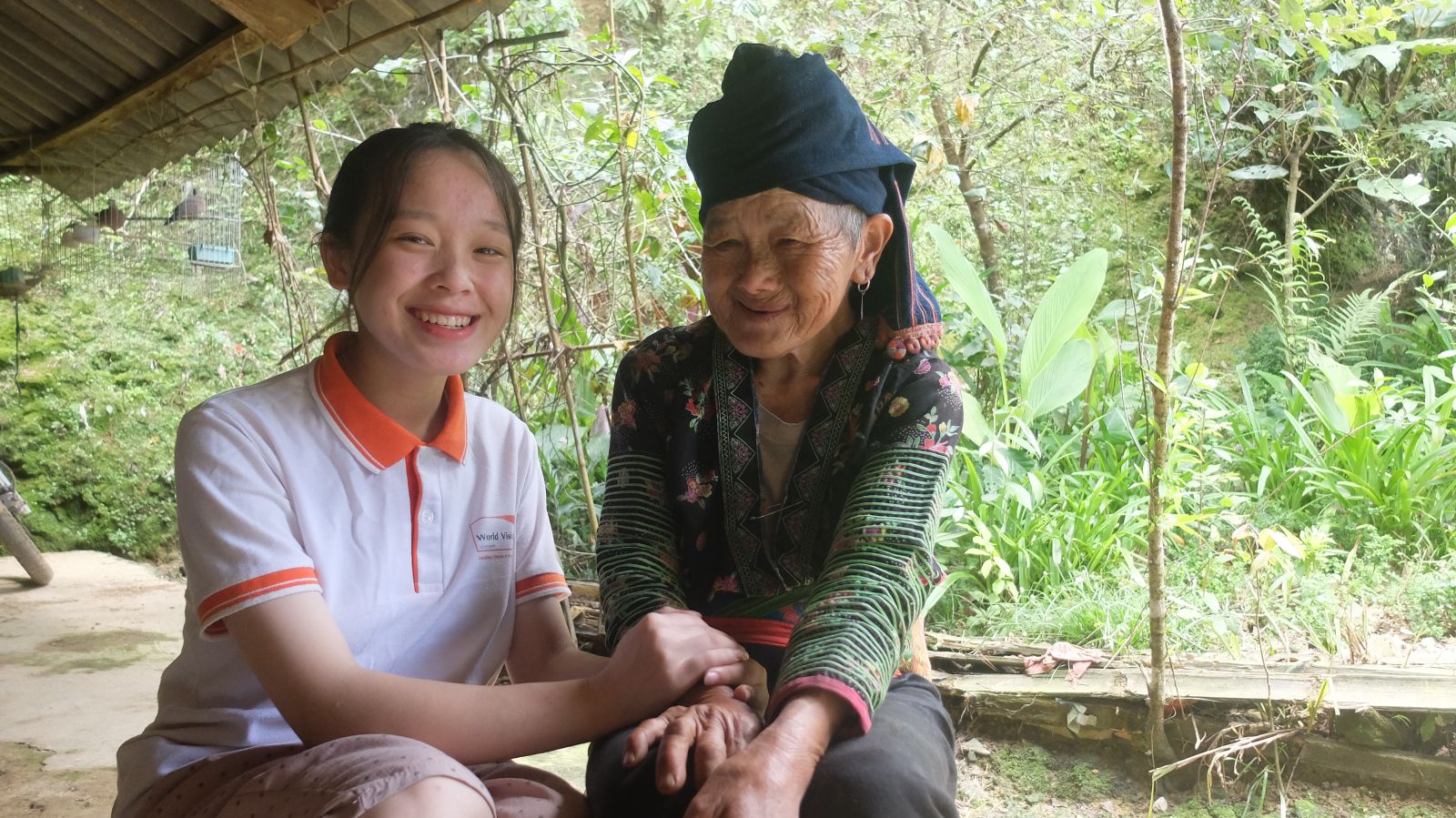 Thảo often tells her grandmother about her day at school. Grandmother is not good at Kinh language, but she loves listening to the stories.

“When I was young, I was sold away just because I was a girl. I didn’t get to go to school. When I got here, I started working in the field and doing my duties as a wife while my husband was away studying. I had to wake up very early in the morning to fetch water for the whole family all by myself. Back then, we didn’t keep chickens in barns, and they kept escaping to the forest.  So, I couldn’t even have chicken porridge after giving birth…” her grandmother’s voice shook when she recalled the hard times. “Now, my grandsons and granddaughters all get to go to school. World Vision Việt Nam gave us a toilet house, water tank, and even barns for keeping our geese and pigs. I am very grateful”.

Both Thảo and her brother had home to pursue their studies: Thảo studying at one of the Điện Biên’s province high schools and Quốc attending university in Hà Nội. Ms. Mỷ worried that the physical distance might become the “real" one between her children’s hearts and family. But then, at World Vision Việt Nam’s Celebrating Families Club, Ms. Mỷ learned how to care for and show love to her adult kids while sharing the workload with her husband to build a happy and healthy family. Ms. Mỷ was among the 479 parents and caregivers in Điện Biên Đông district to receive World Vision Việt Nam’s training on nonviolent parenting and healing relationships to create safe and loving households. And in two years, the reported number of child violence across Điện Biên Đông’s four targeted communes decrease by half (2022).

When learning that her high school was looking for a representative for the province’s aerobic competition, Thảo was genuinely interested, but she was hesitant at first. Doing contortion was a favorite game of Thảo and Quốc when they were young, and she was really good at it – at least her brother said so, and she could do difficult stunts that Quốc could not. But she had never performed in front of other people, “It would be nice to show this to people other than my brother…” Thảo thought.

If she was the same timid, quiet little girl a few years ago, Thảo would not dare to sign up. But thanks to the “training” she had with the Children Club’s shows and soft skill classes the Sponsorship program, Thảo thought it would be just like when she performed for the club, and “well, nothing to lose”. After signing up for the competition, Thảo only had two weeks to prepare. And she might have a real talent because, despite the short time, Thảo picked up the stunts very quickly and won two bronze medals for her school with her graceful but powerful moves. 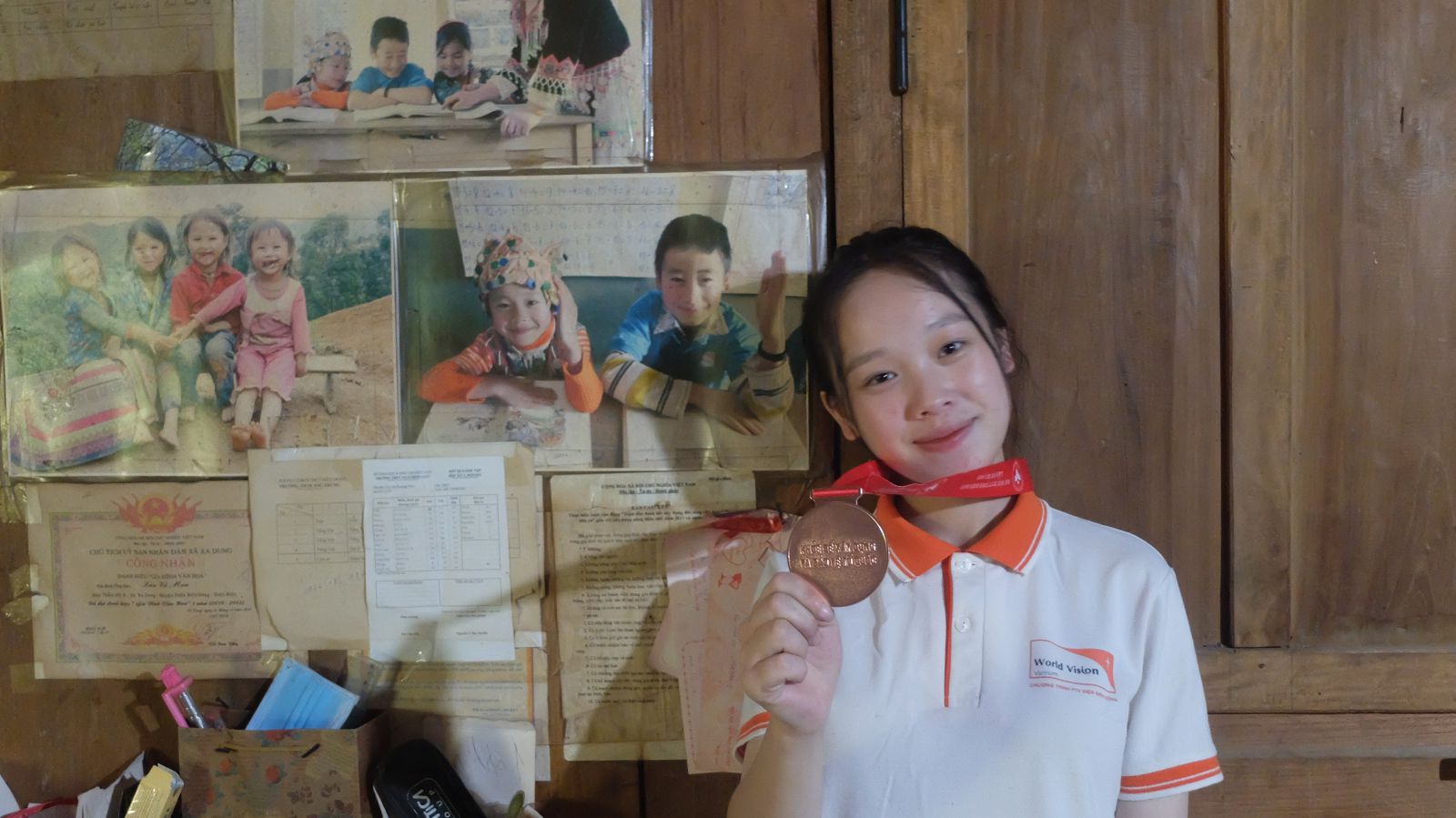 When asked whether she would pursue a career in aerobics, Thảo just smiled and shared: “Last week our club leader, Sinh, just gave us a very interesting class on self-actualization. We learned to question ourselves to find what we really like and don’t. And this session, I think I have a pretty clear idea of what I want to do in the future. I want to teach and play with small children, and eventually, help them explore the world and their potential. So, I want to become a kindergarten teacher”.

Now a 17-year-old senior in high school, Thảo enjoys “practicing” her skills with the neighbor kids whenever she comes home during breaks and holidays. The little kids adore her as they sit on Thảo's porch and listen to her reading the spelling book. Other than reading and singing to the little children, Thảo often gets creative and makes up fun games for them to play along with. Their laughter makes the whole neighborhood come to life. 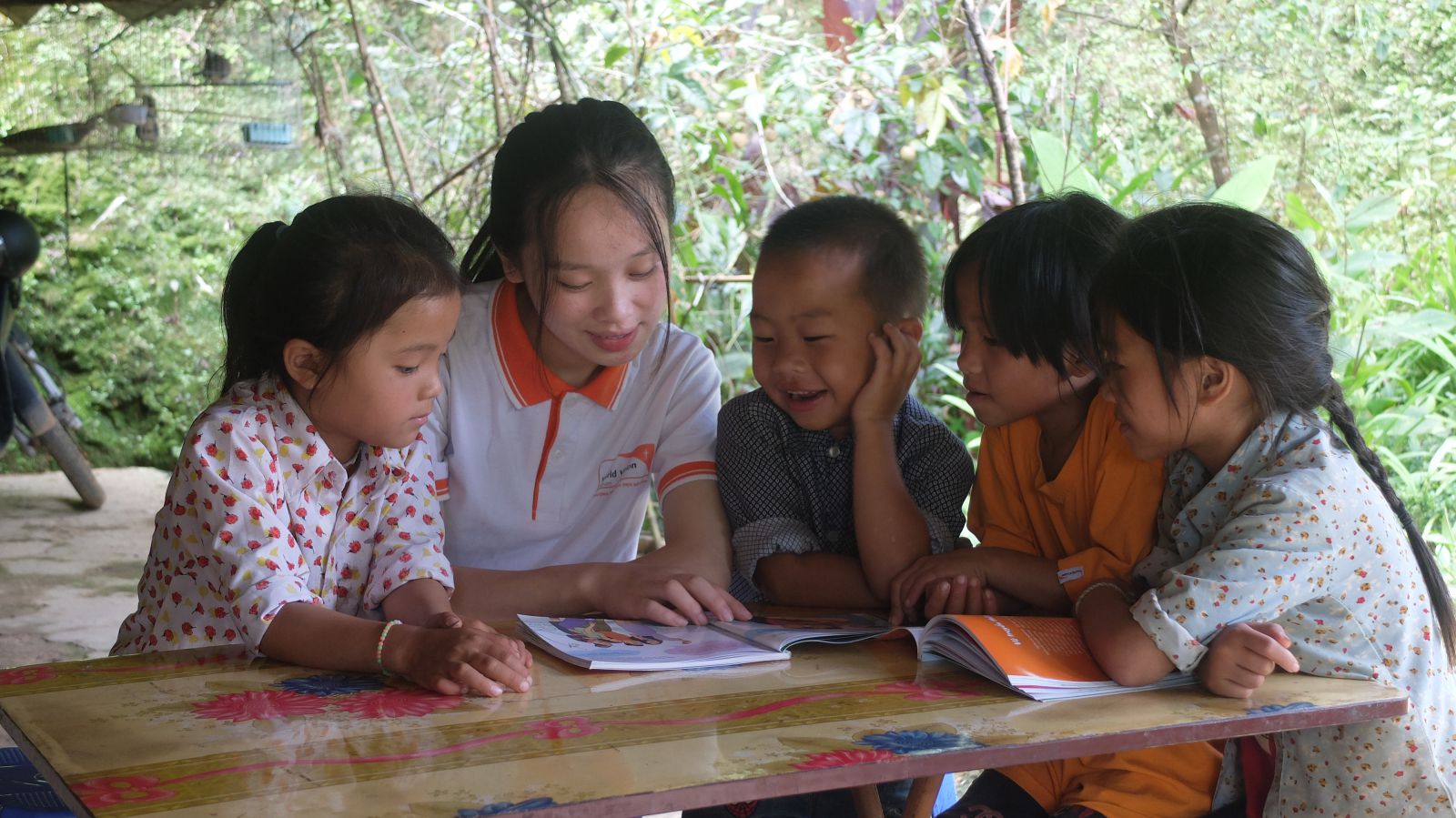 After finishing her chores, Thảo loves gathering up the neighbor kids and reading to them

Like Thảo and her brother, many children benefiting from World Vision Việt Nam’s wide range of support have become confident and capable young adults who are working hard to give back to their community. Through integrated and holistic approaches, World Vision Việt Nam is helping vulnerable children and their families in Điện Biên Đông and across Việt Nam have better chances at a happy and comfortable life.