“Step by step, our lives are getting better.”

This year, Chư’s Christmas card from Jo and John – his sponsor from Australia – came in a little early – it was only September. Nevertheless, the bright orange card made Chư’s day, and soon joined other “keepsakes” from the couple on his study desk. There laid a special corner where exploration books, spyglass, and imported crayon sets lying neatly and proudly. Despite having outgrown the picture books, Chư looked at them fondly as they reminded him of his “good pals” who never hesitated to encourage him during his shyer days. 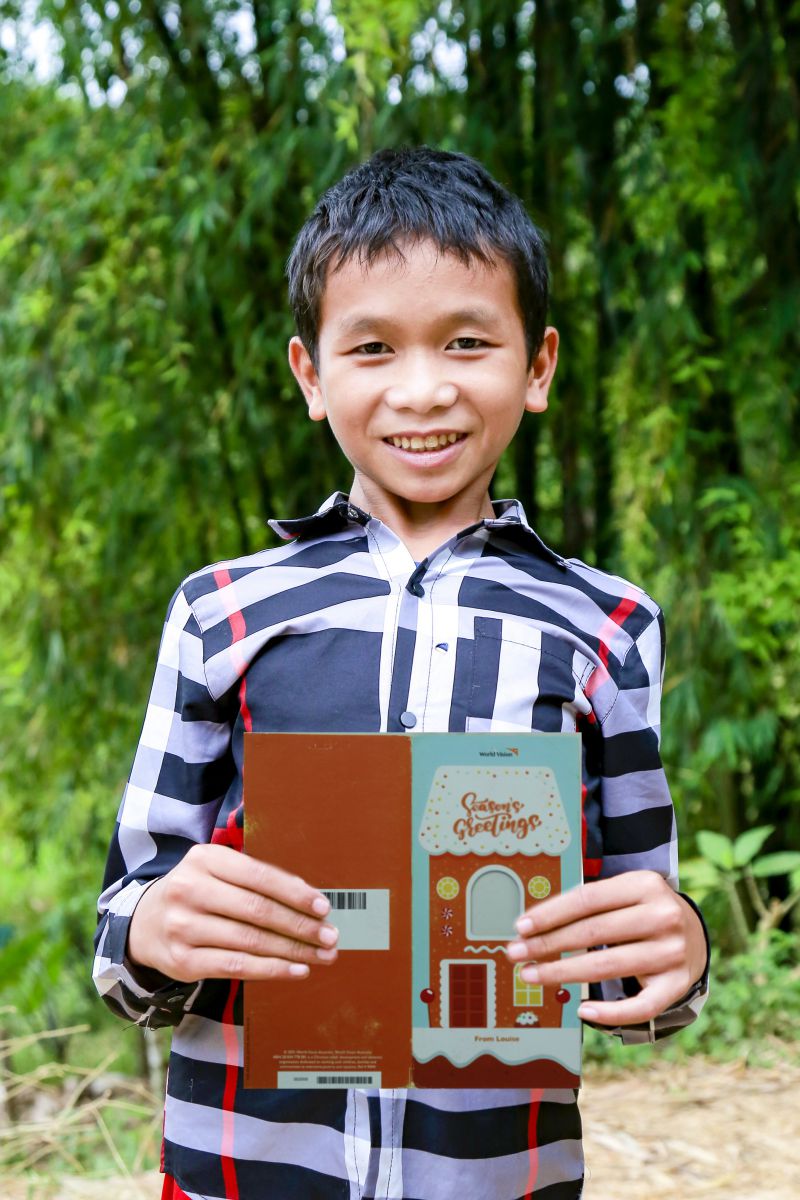 “Keeping the kids in school was just too hard….”

One of six siblings born a low-income family in Tủa Chùa district, Điện Biên province, Chư quickly learned that their family meals were at the mercy of the weather. Living in a remote and mountainous area of Tủa Chùa, like most other households, Chư’s parents relied only on traditional slash-and-burn farming for their income. To feed their six children, Father and Mother had to go up to the hills from dawn and work until it was completely dark outside, leaving the siblings to care for themselves.

“Back then, whenever the kids wanted to go to school, we would have to take them on our back the whole 6-kilometer-distance and then pick them up. Day-boarding was unavailable, so whenever it was harvest time, we could not keep the kids in school”, Chư’s mother, Pàng, recalled. Not going to school made it hard to make friends, but to Chư, this was significantly more challenging with his condition: Chư’s spine was damaged from birth, making him unable to stand straight or walk normally. When other kids were playing and running freely outside, Chư would sit in a corner and observe them with a yearning look on his face.

For Chư and his sisters, the most monumental change for them must have been being able to go to school. Thanks to World Vision Việt Nam’s support, the village’s school was able to provide day boarding for students who lived far away. Hence, Chư’s parents would be able to let the kids stay at school and work without feeling anxious for their safety. 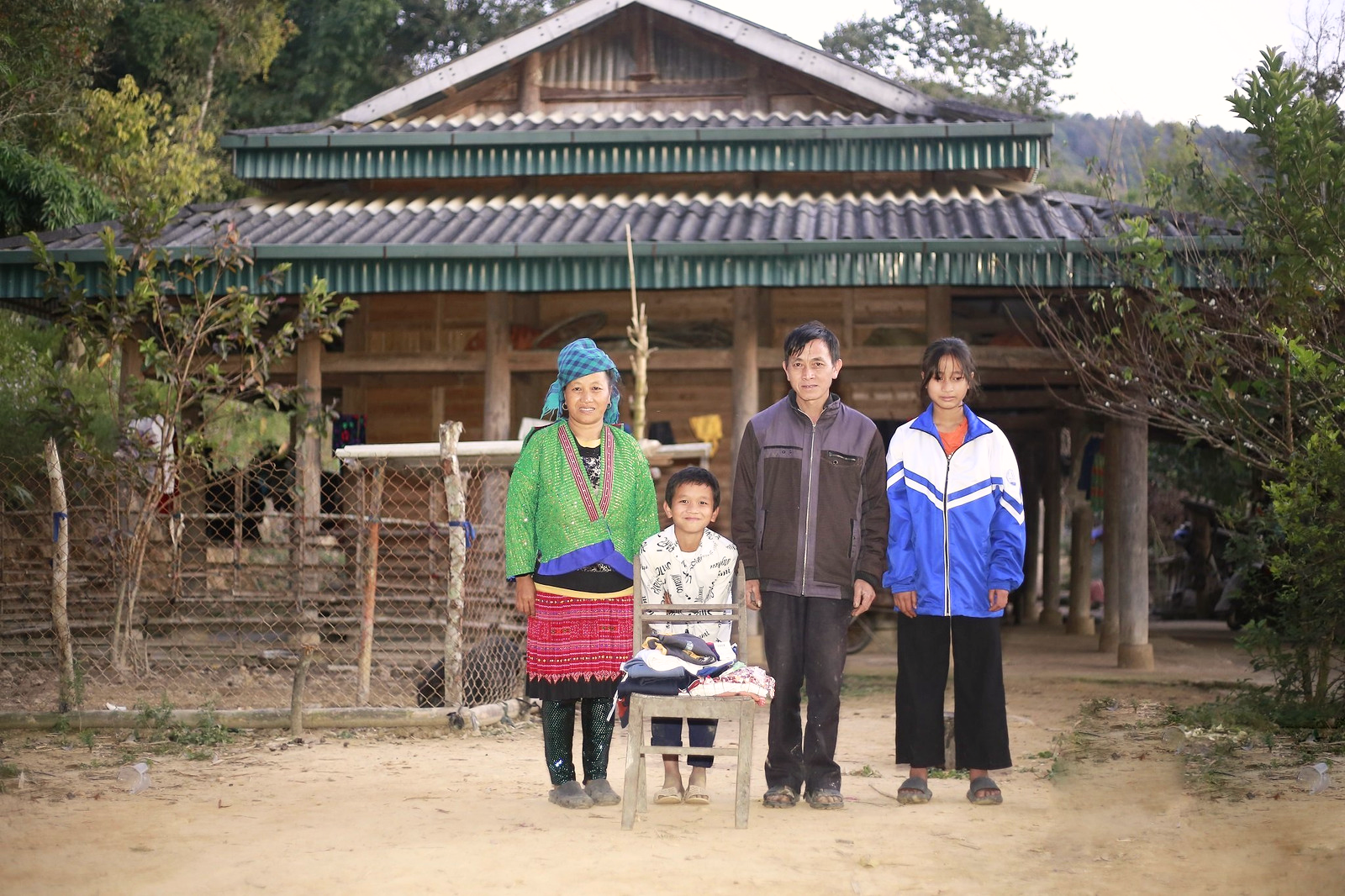 Chư (6 years old, second to left), his parents, and sister taking pictures with his sponsors’ presents. Thanks to World Vision Việt Nam’s support, Chư and his sisters could attend school.

Through the Sponsorship Program, Chư and his two sisters “made” 2 special friends– his sponsors from Australia. From the very first days in 2013, Jo and John had been Chư’s enthusiastic supporters who would always cheer him up along the way. The couple's letters, along with books, color sets, and spyglass, were an endearing source of encouragement for Chư to be comfortable and explore the world in his own way.

“Even though we live across the world from each other, we are still very close because Jo and John write to me often and tell me everything about their lives in Australia. Their gifts give me more motivation to overcome difficulties in both life and my studies to live more happily”, Chư shared. “They just sent me a beautiful card for Christmas. I always love their wishes and imagine how they would celebrate the holiday in Australia.  This year, they wish for our family to have a holiday full of health, love, and peace, which is very meaningful to me,” Chư smiled and showed off his “new arrival” to the collection.

It had been more than ten years since Chư’s family first joined World Vision Việt Nam’s programs, and they had moved a long way. Pàng and her husband registered to join World Vision Việt Nam’s husbandry interest group and received support to set up their chicken barn and learn how to raise livestock sustainably. As a member of the saving group, Pàng was able to take out loans – just between USD 50 and 100 – to cover the children’s tuition fees and pay for the chicks, animal feed, and veterinary medicines. Small loans as such might seem insignificant, but to parents of six like Pàng, those amounts helped her turn over the little “capital” that she had and gradually pay off her debts. Chư (right) playing with his little brother after finishing his chores.

After five years, Chư’s parents could see that although chickens are sensible livestock for their low investment cost and short raising time, they could go for a more profitable animal to expand the family’s livestock business. In 2015, Pàng and her husband invested USD 200 – the family’s fortune – a sow. After three reproduction cycles, with additional help from World Vision, they had saved enough money to get a cow and secured the family’s livelihoods. When looking back at the journey, Pàng said with pride: “Thanks to the income from selling the pigs, our situation is now more steady, and the kids are getting nutritious meals. Little by little, our lives are getting better. We can get all the kids to go to school now.”

With a more stable foundation, Chư and his sisters were also making progress with their self-development. Through the Sponsorship Program, they had the chance to participate in World Vision’s Children’s Club activities, ranging from info sessions on protection against violence and injuries to lessons on exploring one’s dreams and setting goals. At first, Chư was hesitant. He feared other kids might make fun of his hunched back and slow walk. But the lessons on self-worth did help, and Chư soon realized that the kids at the Children’s Club could be quite pleasant after all. Gradually, Chư found himself waiting eagerly for the club’s next meeting and being more open to sharing his thoughts with other members. 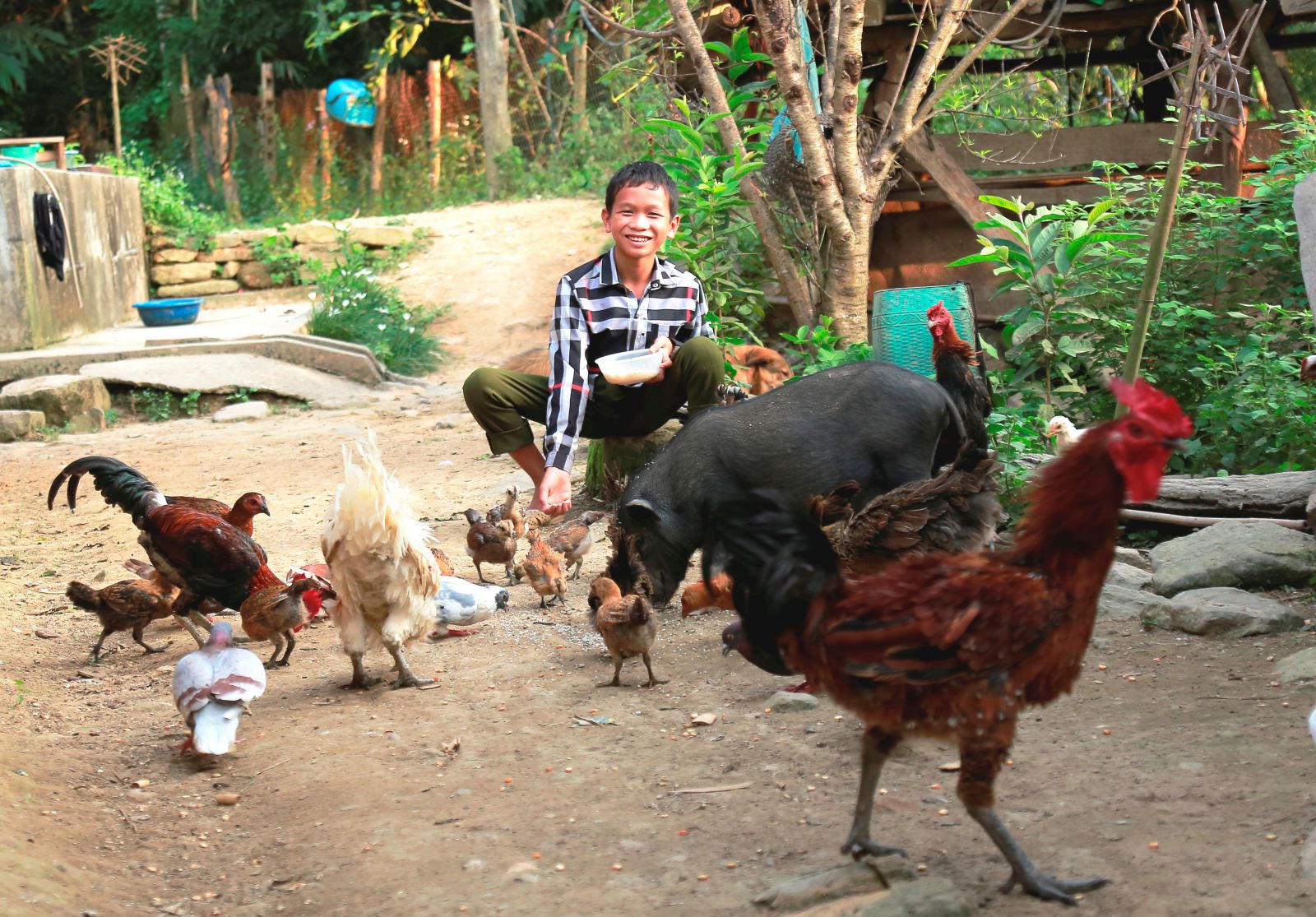 After returning from his class, Chư would help his parents take care of the chickens and the family’s vegetable plot.

Now 13-year-old, Chư has grown out of the timid little boy who often hid behind his parents to become an enthusiastic student and loving brother to his younger siblings. After returning from his class, Chư would help his parents take care of the chickens and the family’s vegetable plot. Moving swiftly from here and there in the backyard, Chư makes sure that all the chickens and the pigs’ rough is filled and the veggie plot is well watered.

When asked about his family and his own changes, Chư answered keenly: “I’m happy and grateful for being in World Vision Việt Nam’s Sponsorship Program and for getting to know Jo and John, who are like family to me. I want to thank them for helping kids like me find motivation and joy in life. I hope that they will have a holiday season full of joy and love with their family and loved ones. ”