Thương’s Story: The journey a timid bud to a blooming blossom

Whenever Village X’s Children Club puts on a performance for special events of the commune or the Sponsorship program, Thương would be there, swiftly giving instructions, helping the kids with their costumes, and cheering them with rare enthusiasm. When being asked why she was so involved in these voluntary duties, Thương would simply smile: “Because I was once a registered child myself.”

Thương was one of many registered children of World Vision Việt Nam’s Child Sponsorship Program in Điện Biên province.

Born in an ethnic family in the mountainous area of S. commune, Mường Chà district, Điện Biên province, Thương was the second out of three children and was only one year younger than her brother. Relying mainly on the crops grown in the family’s tiny plot and having to care for three little children simultaneously, Thương’s parents struggled to put food on the table.

S. was among Mường Chà’s most challenging communes when almost 75% of its households were classified as poor, and Thương’s family was one of them. Dangerous terrain, lack of facilities and necessities, and extreme cold weathers were a few reasons why families in S. commune worked hard and still barely scraped to make a living.

The most valuable possession that Thương’s family had at the time was a water buffalo given to them by the government. Thương’s mother would go up to the hills early in the morning to dig taro roots and sell those by the highway to trucks and traveling coaches. “Back then, I just wanted to sleep with our bellies full, have enough clothes, and go to school like other kids. And every day, I was hoping that we would find more taro roots for my mom to sell,” Thương looked back.

One day when Thương was in her fifth grade, her family had a special visit from the village head. Turned out that Thương had been selected to be a registered child under World Vision Việt Nam’s Child Sponsorship program. And then on, every time on Thương’s birthday, she would receive letters with delicate, colorful paper canes from Etsuko, her sponsor from Japan.

“I still remember that Etsuko’s favorite color was white, and mine was green. The canes were my favorite because I later learned that canes symbolize longevity and happiness in Japanese culture, which made me appreciate Etsuko’s wishes all the more,” Thương shared fondly. 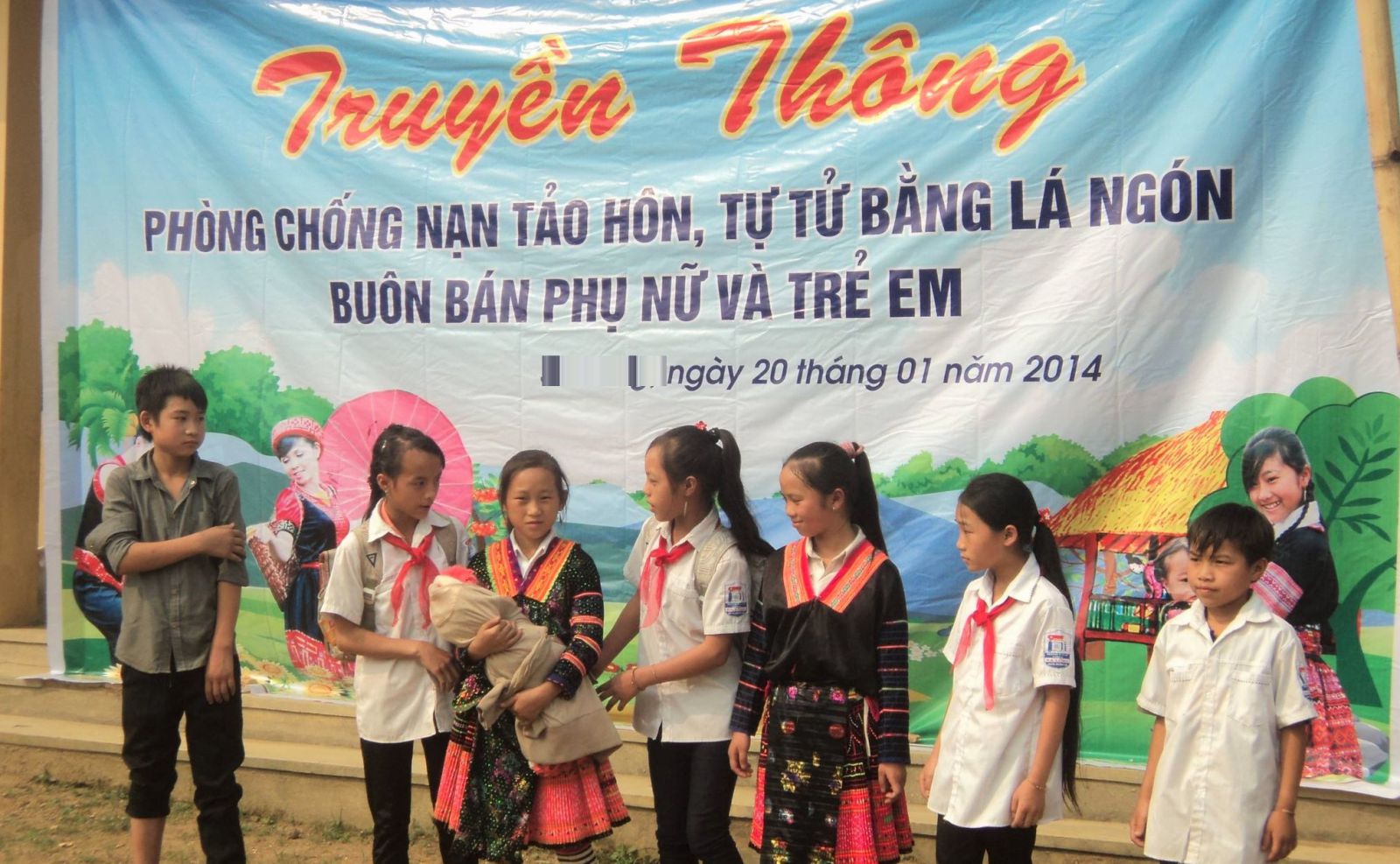 Thương (fourth from left to right) participated in her school’s information session on preventions of child marriage, suicide, and human trafficking in 2014.

Within World Vision Việt Nam’s holistic and integrated approach to cater a better living and learning conditions for registered children, Thương’s family also received different livelihood supports from the program over the years. The family received a water tank to store clean water in drought times, and Thương’s parents enrolled in classes to improve husbandry skills with World Vision Việt Nam’s experts. Other supports include a breeding cow and partial coverage for the medical bills of Thương’s brother when he was hospitalized for thirteen days.

Before, few people would notice the petite and timid little girl who rarely showed up at the village’s events. But after getting into the Sponsorship program, Thương had the chance to join different club activities and special classes, simple things like learning to be grateful or to love yourself to more serious topics, such as protection against child abuse and drug use.

But Thương’s favorite part must be the performing shows at the village’s children club. At first, Thương was scared to dance in front of strangers. But then, after one, two, and three performances, her initial reserve went away, giving in to an energetic and confident performer. After a while, Thương did not just join as a choir girl or a background dancer anymore; she was entrusted with arranging the choreography of the club’s dance sequences or coming up with sketches for the Sponsorship Program’s info sessions. In the Program, Thương had the chance to get involved with different social and club activities that helped her gain confidence and new knowledge

“At the children club, I had the chance to meet new friends, dance, sing and learn new things. And I looked up to my club leaders so much because thanks to them, I got to come out of my shell. So, my dream was to become a club leader and help the children in my village explore their talents”, Thương shared.

Doing what you love is the best kind of job

Due to various reasons, Thương and her siblings only finished middle school. However, Thương continued to be engaged in the commune’s social events and the Sponsorship program. Being an active member of the community, Thương rarely missed a club meeting or information night.

Fast forward a few years later, Thương is now a mother of two living with her husband’s family while he is away for work. With a four and a one-year-old, Thương is busy balancing between taking care of her children, keeping the house well-organized, and fulfilling her duties as an active community member. Since her early days in the Sponsorship Program, Thương has showcased her abilities and passion for improving her hometown. Hence, she was selected to serve in various positions, such as secretary and home visiting collaborator of her Saving for Transformation group, a member of the village’s Rural Development Board, and most importantly, chair of her village’s children club.

During club meetings, Thương and the children would plan activities to help the community, such as training on Internet safety and COVID-19 prevention. Back in 2021, when World Vision Việt Nam launched a national dancing competition called “Hope in Class” to raise awareness about school violence against children, Thương’s club ensembled a dance sequence that involved children of the whole commune, and they did not miss a day of practice, rain or shine. Eventually, their hard work paid off when the video won the “Impressive Message Award” of the year. “Thương is very sharp and quick-witted, but she is also very meticulous with every task and paperwork she submits. Whenever she encounters any unfamiliar issue, Thương will make sure to communicate and pursue the topic until she finds a solution,” Nguyễn Thị Huyền Trang, World Vision Việt Nam’s Development Facilitator who has been working closely with Thương, shared proudly.

Busy as she may be with all the social duties and responsibilities, Thương makes sure that she spends quality time with her children. As a loving but strict parent, Thương applies what she learned during her time in the Sponsorship program and World Vision Việt Nam’s parental training to teaching the children. Using the “no beating policy” and making learning fun with games and songs, Thương wants to do things differently and help her children catch up with all the trends like other kids in urban areas. 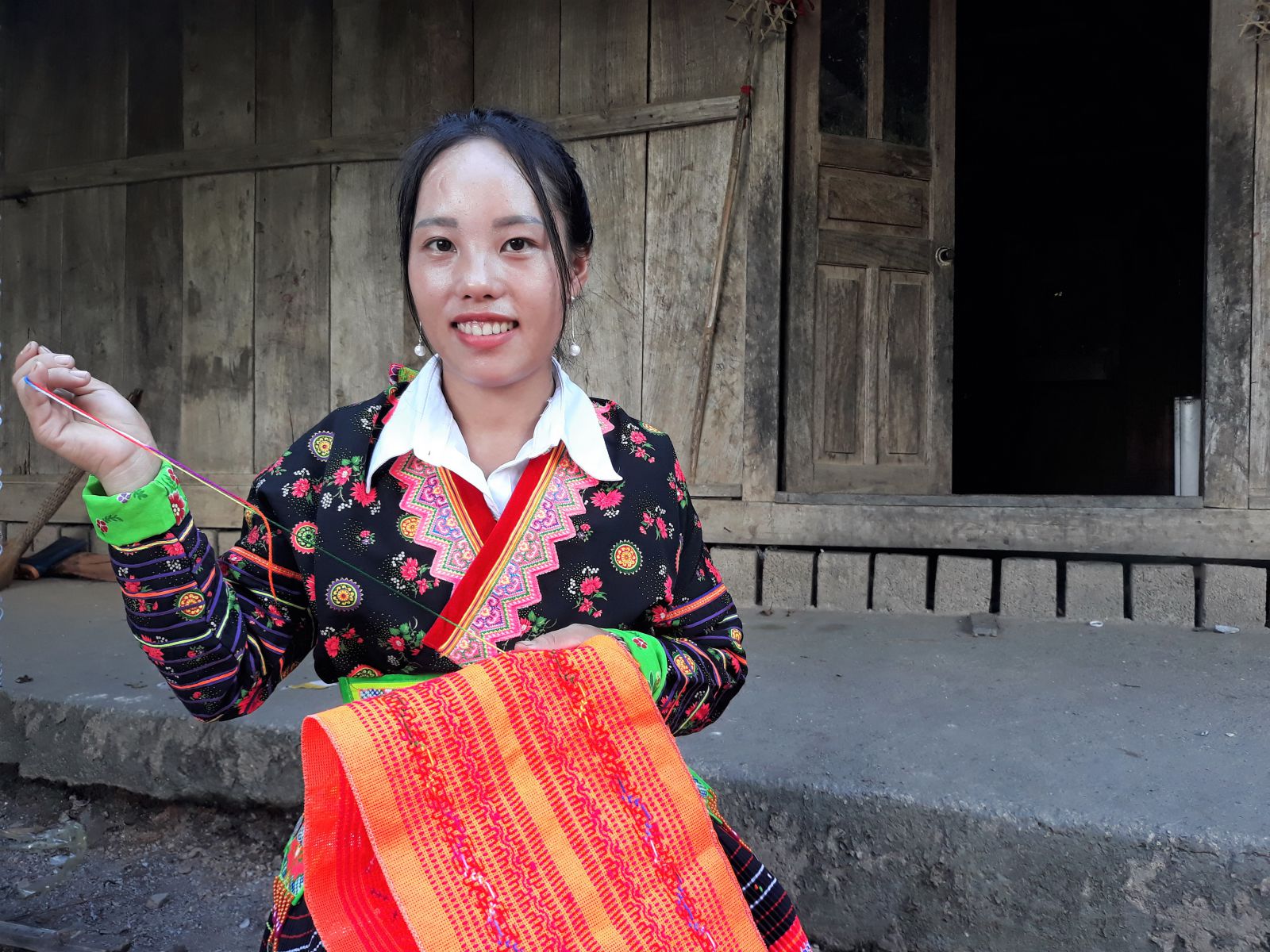 Despite being busy with her social responsibilities, Thương makes sure that she fulfills her role as a loving and competent mother and wife.

“At the moment, my goal is to ‘elevate’ our club and organize fun and meaningful activities for the children. Like for my own, I hope that all the children in our community have a safe environment to live and thrive, play as kids, and have all the opportunities to learn and reach their fullest potential”, Thuơng shared about her plans for the future.

Like Thương, many registered children who have graduated from World Vision Việt Nam’s Sponsorship Program are working hard to give back to the organization and their community. Through integrated and holistic approaches to improve local people’s livelihoods, living conditions, and education, World Vision Việt Nam has been helping children in Mường Chà and across Việt Nam reach their full potential and enjoy the fullness of life.