Tiny steps make big strides: “If I don’t get in this year, I will try again next year”

In Nam’s small but orderly cottage, awards and certificates were carefully framed and hung neatly on the “spotlight” of the main room. Those belonged to Nam and his older sister, which had been serving as mementos for their presence in the house after his sister got married and Nam was away for school.

It would be hard to believe that Nam, the puny, reserved boy in a difficult home would soon be graduating from one of the most prestigious high schools in Điện Biên province.

“I knew our situation was different”

Nam was born a low-income Thái family of Điện Biên Đông district, Điện Biên province. With his father being able to speak a mixed combo of Kinh and Thái language and his mother Thái only, the family relied mostly on their crops, wild veggies found on the hills, and a few livestock.

Like many others in the village, Nam’s house did not have running water or a built-in toilet. Every day, his father would have to fetch water far away, but it would be barely enough for drinking and cooking. “We would reuse the water after washing vegetables for washing ourselves. And we would take our business up in the forest”, Nam’s father, Mr. Thuấn, recalled. Lack of clean water and hygienic condition were the reasons why Nam and his sister got regular rashes and stayed underweight.

One day, when he was watching the news eagerly with other kids at the community house, Nam was mesmerized by one special scene: brave police officers catching all the bad guys and keeping people safe. And he decided that he would wear that “awesome” uniform and fight crimes when he grew up.

But then, as if life was not hard enough, Nam’s father got one of the “social evils”, depleting the family’s little possessions. It took several years for Mr. Thuấn to finally come clean, but his record had been marked for breaking the laws, making Nam’s goal of becoming a police officer a far-fetched dream.

“Back then, even when I was young, I knew that our situation was different. Whenever I saw a glimpse of those green uniforms, my heart wrenched because no officer school would let me in with a record like that”, Nam shared.

When one door closes, another window opens

And then, World Vision Việt Nam came to Nam’s village. Clean water and living conditions were among the Program’s priorities, and after three years, Nam’s family and more than 150 low-income households in seven villages of L. commune received support to build their own toilets. After Nam’s village got its own running pipes, World Vision Việt Nam often held information sessions on how to keep living areas sanitary and how to use clean water to improve children’s health. Throughout the years, the Program provided clean water and hygiene sessions for all K1-9 students in L. commune, and it successfully campaigned for water reforms in two more villages, increasing the beneficiary households to 720 families with children under 5.

With the new toilet and running water, Mr. Thuấn did not have to fetch water anymore. Nam and his sister’s rashes also gradually went away. But these were not the only changes to Nam’s life. Getting informed about the family’s situation, World Vision Việt Nam registered Nam in the Sponsorship program. Other than getting financial support and encouraging letters from his sponsor, Nam was enrolled in different soft skill classes and extracurricular activities with the Children Club.

At first, Nam was not too eager about those activities, especially thinking his dream would still be out of reach no matter how hard he might try. But then, Nam met uncle Ánh, the Program’s coordinator. He was the one who “dragged” Nam to club meetings where he taught the children about important life skills; things like how to set up your goals, staying focused, and asking for help. 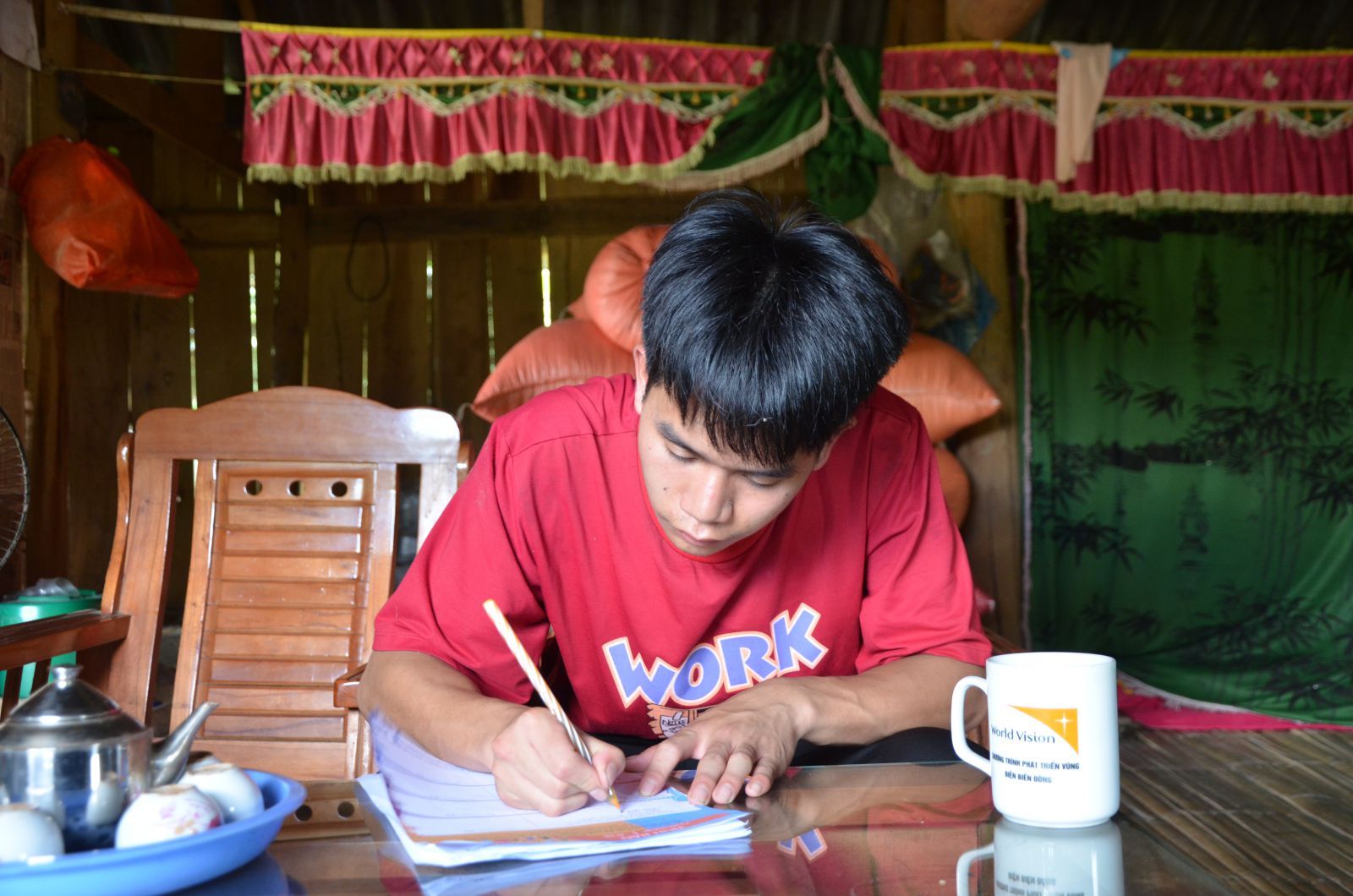 Little by little, Nam was paying more attention to those classes. Not wanting to give up just yet, Nam tried approaching his dream as uncle Ánh instructed. He started asking around about the requirements of getting into officer schools and doing research by himself. And hard work paid off. After an extensive search, Nam found out that he could enroll in the Political University to become a political officer. This new path could still enable Nam to pursue a career in the army and ensure entire coverage for his study, which would relieve a huge weight on his family’s finance.

Knowing that the Political University was among the most selective programs in Việt Nam, Nam remembered uncle Ánh’s lessons on working towards one’s goal and started early. Whenever he was done with his chores, Nam would study for the high school entrance exam, and finally, he got into the province’s boarding school – one of the most competitive high schools in the area. When most teenagers of Nam’s age would stay close to home, Nam was determined to leave as the province’s school would have more up-to-date programs and facilities to help him better prepare for the university entrance exam.

At the boarding school, Nam tried to focus on his study as much as he could. After class, he would spend his afternoons and evenings in the library to read and expand on the knowledge he learned during the day. Hence, throughout high school, Nam earned the title of “Advanced” and “Excellence” student. Occasionally, Nam would allow himself to play sports with his friends to keep in shape and improve his health. 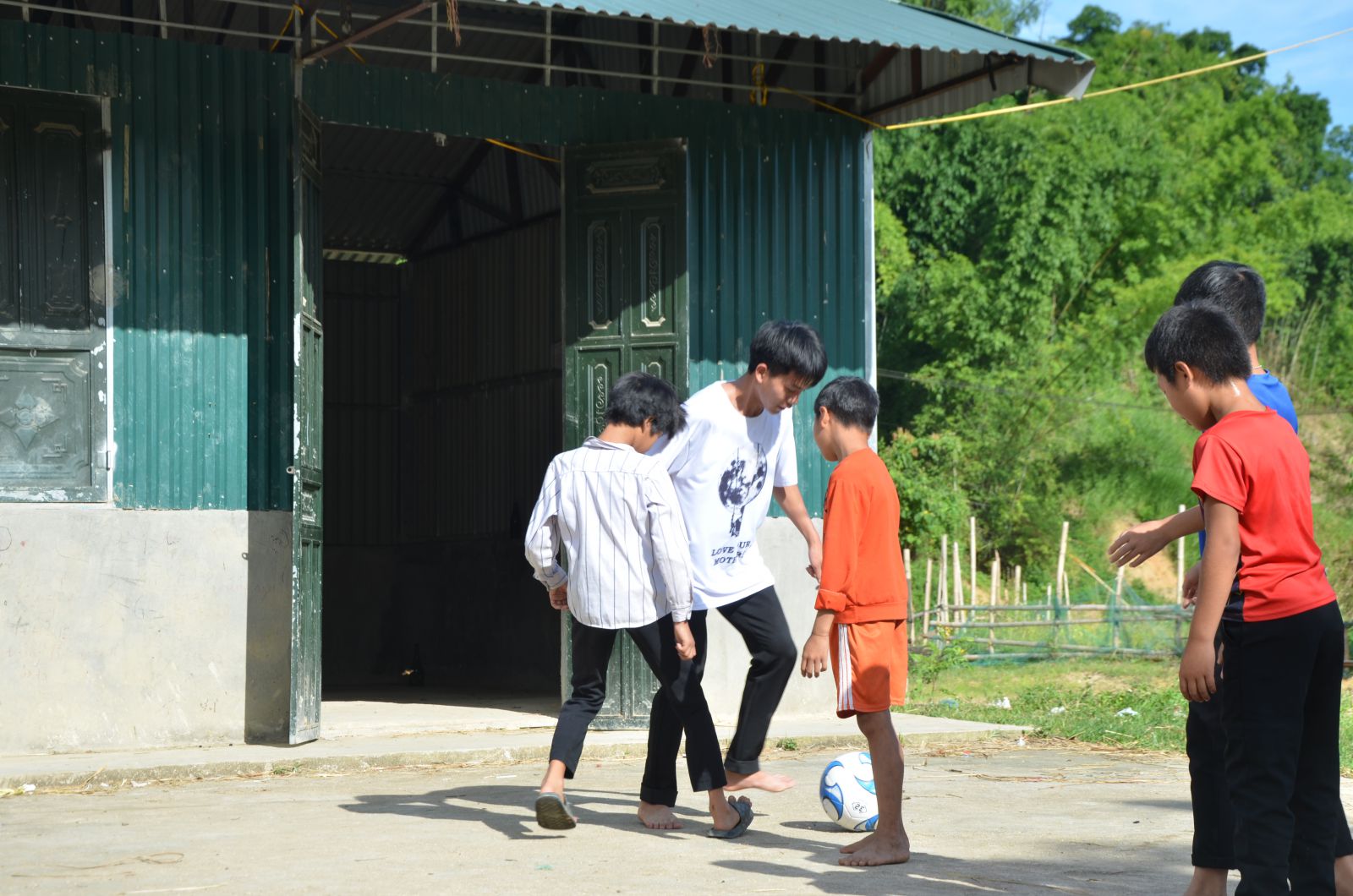 On his days off, Nam loved playing soccer with other kids at the village’s community house built by World Vision Việt Nam

And Nam thought his high school years would pass uneventfully like that until COVID-19 hit. Although all of his classes were moved online, Nam could not go back home as he would not have the necessities to carry on with his study. “The pandemic hit us quite hard. My parents could not work in the field as usual, which took a toll on our finance. I know that to send me those 25 dollars for Internet services, they had to really tighten their belts. During that time, my parents did not have access to any of the broadcasted updates to protect themselves, so I was worried sick” Nam recalled. “But whenever I called home, my parents were still doing fine. My mom said that officers from World Vision Việt Nam came all the way to our house to give my parents updates and medical kits like hand sanitizer and masks. In my village, the Program’s coordinators also instructed each household to clean up and disinfect their living quarters. So, knowing this made me feel less worried, and I could continue to focus on my university exam”.

During this time, Nam also found comfort in his sponsor’s support, which gave him the courage to keep trying. “My sponsor often asked how I was doing. Besides my parents, she was the one who knew about my dreams and plans, and she had always been there whenever I needed encouragement. She is like a true friend who cares about me, about the smallest details in my life”, Nam said fondly.

Having completed the national exam, Nam came back to his parent's house to wait for the result. “I am very confident that I will pass the high school graduation part”, Nam stated firmly. Being the quiet one, Nam showed his affection by trying to help his parents as much as he could. Hence, whenever Nam was home, the house always got enough wood; the cows were fed, and hot meals were waiting for Mr. Thuấn and his wife to come back from the field. “If I don’t pass this year, I will take a gap year and retake the exam. I will get the Political University and become a political officer to help my community and take care of my parents” Nam said as if he was making a promise to himself. 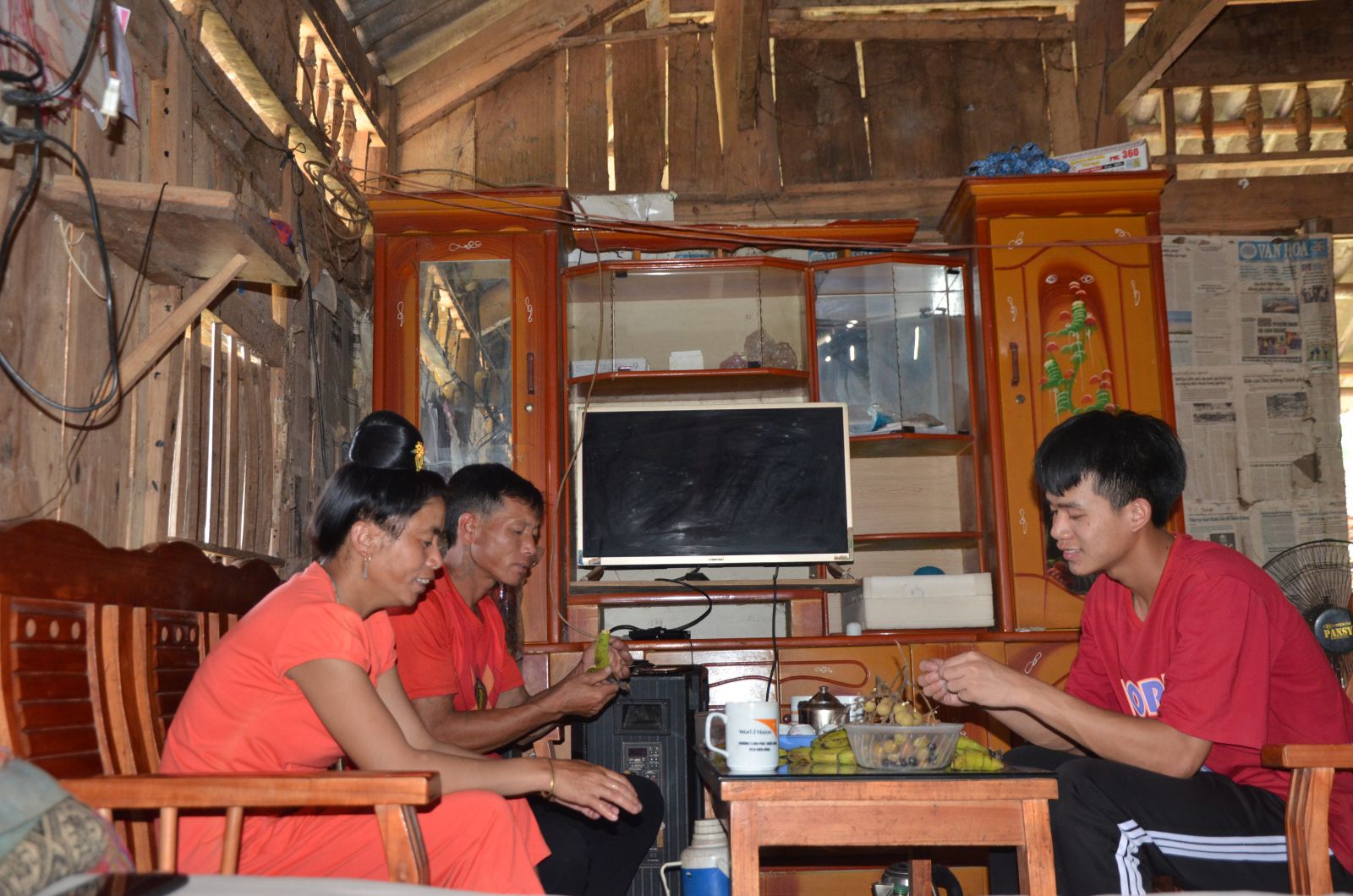 Feeding and petting the family’s cows gently, Mr. Thuấn explained: “These cows are our savings for rainy days. When Nam goes to university and needs money, I will sell them all to support him. I want Nam to fully focus on his study. Through World Vision, my son had the chance to take soft skill classes that helped him get where he is now. This is very different from our time when learning to read was already a luxury”, Mr. Thuấn looked back. “I hope that Nam will be able to follow the path of his dream. Wherever he wants to go, we will support him… as long as he won’t forget his root”, Mr. Thuấn’s voice suddenly trembled.

World Vision Việt Nam’s efforts in L. commune are helping positive changes happen for children like Nam. In addition to monetary and livelihood support, most vulnerable children and their families are getting equipped with the necessary knowledge and skills to transform their living conditions and secure their chances at having a better life.