“Now, the way to school is not so far anymore…”

Every day, Vũ, 15 years old, would wake up when it was still dark outside and prepare to go to school. Since the school is 7 kilometers away, he would have to find someone willing to give him a ride or walk all the way, rain or shine. So when he received a new bicycle from World Vision Việt Nam, Vũ broke out: “I didn’t even dare to think that someday I’d have a bike this nice. It’s like a dream.”

The bike was a small encouragement for Vũ to continue his journey of resilience and determination for a better future.

Born a low-income household in Minh Long district, Quảng Ngãi province, Vũ and his sister saw their parents struggle to put food on the table when the entire family relied on their small plot of land. As if it was not difficult enough, Vũ’s father was a hard drinker, and whenever he came back, having had way too many drinks than he could handle, Father would use his fists on his wife and children. The family rarely had any money in the house because Father would take away any small savings they had and pour it into his drinking.

Then, one day, Vũ’s mother decided she could not take it anymore. She filed in for a divorce and left. Without their Mother and having to care for her brother and drunken father, Vũ’s sister had to drop out to work and support the family. And then, when it was time, Sister also home to get married and start her own family. Vũ had to stay back with Father, who had already sunken deep alcoholism. After a while, even Father did not return, leaving a 10-year-old Vũ without anyone to turn to.

But not broken will

Even though her own family was struggling, Sister took Vũ in and was determined to give her little brother a better life. Despite all hardships, Vũ still managed to do exceptionally well at school throughout his elementary years. His narrow bed at Sister’s house served as Vũ’s study place. that underlit corner, and even without necessities like study lamps, stationery, and books, Vũ learned and thrived thanks to borrowed books and support from his friends and teachers.

Seeing her brother’s potential and determination, Sister did not mind working extra hours or borrowing here and there to support Vũ’s studies. “Vũ loves studying and works very hard. Even though the school is quite far from our house, he doesn’t miss a class. Some days, he hitchhikes with our neighbors; other days, he walks. The distance doesn’t bother him at all. Because of our situation, I can’t give him good things like his friends have, but he never complains and is determined to finish his schooling no matter what”, Vũ’s sister spoke of her brother proudly. “I had to drop out of school, so when things get too hard, I would tell him: ‘We can go hungry, but you can’t go uneducated,’” she added.

A helping hand along the journey

Knowing Vũ’s situation, World Vision Việt Nam quickly identified Vũ as a “most vulnerable child” and brought him the Sponsorship Program. As a registered child, Vũ started to get out of his shell and joined World Vision’s Children Club, where he had the chance to meet other friends with similar backgrounds and learned about essential life skills, such as how to protect himself and others injuries and different forms of violence. In addition, through World Vision Việt Nam’s holistic and integrated interventions to improve the comprehensive well-being of registered children in the Program, Vũ’s sister also received support to set up a vegetable plot and chicken barn. Gradually, the family’s financial situation was getting more stable, with each meal getting more hearty and substantial with fresh veggies and eggs from their own backyard.

Having a more stable support system, Vũ put his mind to his studies. After working hard in class, Vũ would come right back home to help his sister water their vegetable plot and feed the chickens; after getting all the chores done, Vũ would use his free time to do his schoolwork and read. And all of his efforts paid off when Vũ was always among the top students in his class.

“With the new bike, my way to school doesn’t seem so far anymore.”

The image of the thin and quiet boy who often hitchhiked with his friends and rarely missed a class had become a staple at L.M Secondary School. As an encouragement to his resilience, unbroken determination, and excellent performance, World Vision Việt Nam decided to give Vũ a surprise: a brand new bicycle to help him continue his quest for knowledge. 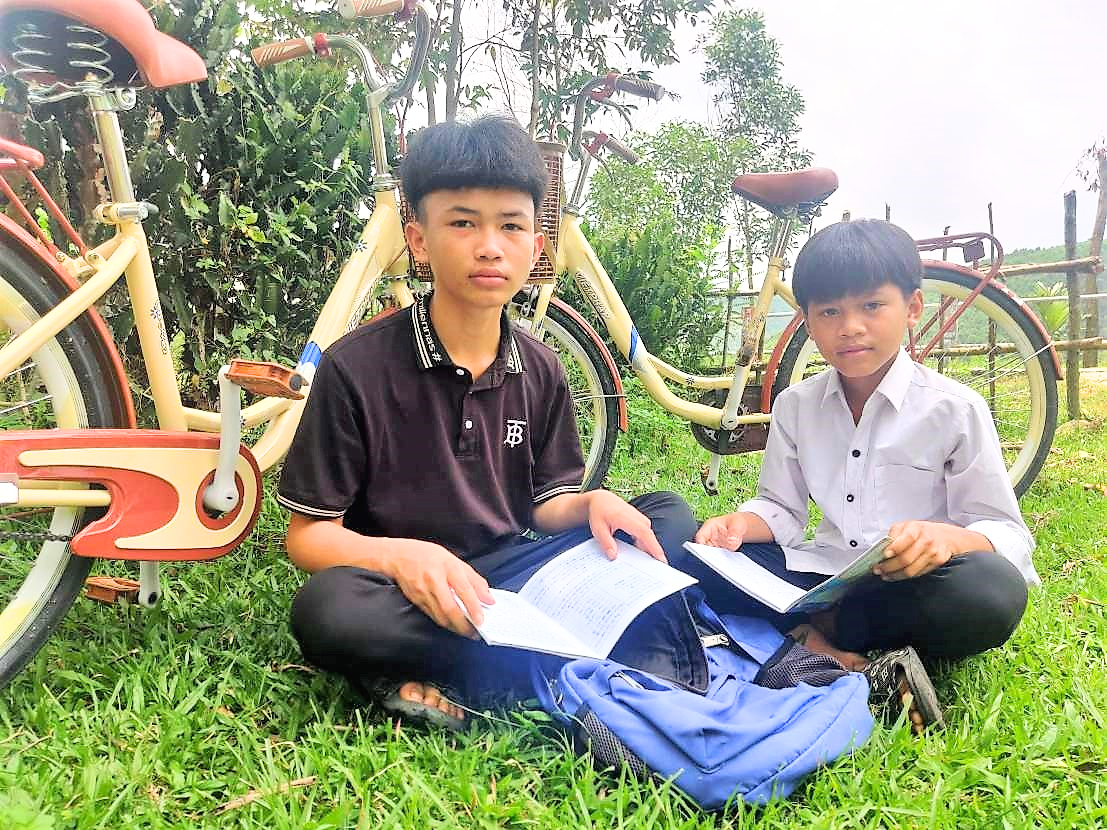 With the new bike, Vũ would no longer have to walk to school.

“Because we couldn’t afford it, I often had to ask my friends to give me a ride or walk the whole way. Many times, when storms were raging outside, I thought about quitting because it was impossible to walk forward. I can’t express how happy I am to have this new bike and, on top of all, support from people who care for me. The bike, books, and stationary the Program will give me more strength for this school year”, Vũ shared. Now, Vũ knows that he is not alone on his path, and when the road gets bumpy, there will be helping hands to keep him moving forward.

“All the support from my teachers, friends, and especially from World Vision, along with the Children Club’s activities and lessons, have given me a lot of joy and encouragement. I will try my best to study and achieve my goal of becoming an architect to build beautiful constructions for my hometown. I want to thank all of the sponsors for giving disadvantaged students like me meaningful support and helping us have a firm footing in our journey head”, Vũ sent his message with gratitude.